It’s been cold and dreary around here for the past few days.  I’m thinking a big bowl of loaded potato soup is in order to warm my spirits.  I love potato soup.  It’s thick, hearty, cheesy, and typically has chunks of salty bacon.  What’s not to love?

To make this soup, whisk some cheddar cheese condensed soup, chicken broth, cream cheese, and black pepper together in a large crock pot.  Stir in 2/3 of a bag of frozen cubed potatoes (A.K.A southern style potatoes).  Cook, covered, on low for 8 hours, or high for 4 hours.

The potatoes break down as the soup cooks.  When you stir the soup, it gets thick, smooth, and creamy.  It resembles a cream-based soup.  However, it doesn’t actually contain any cream.  This is why you don’t want to add all the potatoes at once.  Twenty to thirty minutes before serving, stir the remaining potatoes into the soup.  These potatoes aren’t cooked long enough to break down, which adds texture to the final product.

To serve this soup, ladle it into bowls and top with sliced green onions and crumbled cooked bacon.  To save time, I use packaged pre-cooked bacon bits, or bacon pieces.

What you end up with is an amazing soup with all the flavors of a loaded baked potato.  But, with a lot less effort, and fewer calories. 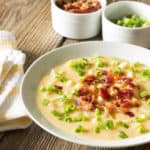 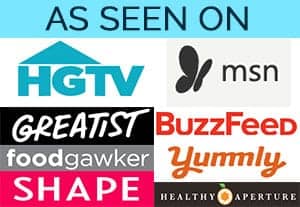 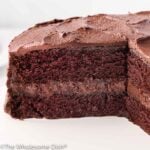 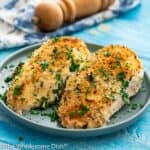 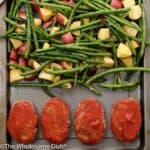 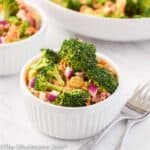 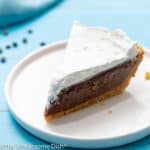 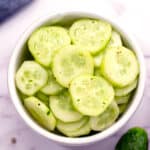